After a loss, Ted decides to use Nate's play to upgrade Richmond's attack.

This activity is designed to improve sentence accuracy and complexity. Most students can produce the key content words in a sentence. However, they have difficulty with accuracy because the functional words are difficult or can seem unimportant. This activity will help learners eliminate problems with these functional words by giving them immediate feedback on the mistakes they are making. It will also help students develop their use of more natural, varied and complex sentence structures.

Directions: Write sentences about the video clip using the words given. You can change the word form or add words, but you cannot change the word order. Use present tense.


Ted draws Richmond's current offense on the whiteboard(,) and then (he) erases it.


Nate shows his play to Ted and Coach Beard.


Nate wants to use Jamie as a decoy.


Ted decides to give Nate's play a shot.


Rebecca informs Ted (that) she (has) stopped a newspaper from running a photo of Keeley and Ted.


Jamie complains about being used as a decoy.


Trent asks Ted who came up with the play.


Trent is shocked (that) Ted trusts Nate to design the team's offense.


This activity has two purposes.

The first purpose is to improve listening accuracy. Learners can often understand the general meaning of a video but still not hear and understand many of the words that are said. This is because native speakers tend to say the functional words unclearly. (eg. don’t know, going to, want to, can’t, must have) This activity is designed to help learners improve their ability to hear these words.

The second purpose is to improve pronunciation.

TIP: Learners should listen to and read the sentences at the same time. Then learners should try to copy the pronunciation and intonation of the speaker exactly.

TIP: Exaggerating the intonation and feeling of the speaker is useful. It may feel awkward or funny, but it will help you sound more natural.

Directions: Play the audio clip and try to repeat what you hear. Click "Show" to see the text.

What time did you get home last night?

Fire away. What do you got?

So I'm going to ask you real quick again. Do you think this idea will work?

All right, come on now. Walk us through it.

What? You're going to use my play?

In exchange, I've agreed for his more reputable newspaper to do a profile on you.

You know what you do with tough cookies, don't you?

Yeah. No, that sounds about right. That's good.

You have got to sell that run-through hard, baby.

I want you winning an Oscar at the ESPYs next year.

Unfortunately for you, though, no one thinks it's funny.

Agree to disagree. I find it hilarious.

Someone has been walking their dog here. (I) found another poo.

Do you mean to tell me you're entrusting a Premier League team's attack to the kit man?

If you knew Coach Beard, you would know what a big deal that was.

Ted: Crystal Palace kicked our booties last week. And this here, is our current offense that we are running, and I think it stinks! Get rid of it.

Ted: Now, you might be wondering why'd I draw all that up there just to erase it. And that is because I believe in symbolic gestures.

Ted: What time did you get home last night?

Ted: Really? Now, look, our whole offense right now is all give-and-go. Give the ball to Jamie and everyone else can go to hell. So, I am officially on the prowl for any new ideas, you hear?

Ted: You got something, Nate?

Nate: Okay, right. Well, it's just... No, other pocket. It's just something that I thought of. Sorry. Jesus. Not that one. You know what, it's not even very good. It's probably really bad. It's embarrassing even. I just...

Ted: Sorry, Nate. I have a real tricky time hearing folks that don't believe in themselves. I'm going to ask you real quick again. Do you think this idea will work?

Ted: Why you screaming at us, Nate? We're right here. All right, come on now. Walk us through it.

Nate: Okay. So, I thought if we started the attack on the wing, Jamie could run through nearside, then when the defense follows, Sam could fill his spot.

Ted: So, use Jamie as a decoy?

Nate: What, you're going to use my play?

Ted: Yeah. I mean, we're going to try it on, see if it fits. You know, it might not. Then again, it might be a very flattering silhouette, and I might wear it right out of the store.

Ted: There you go.

Rebecca: Thank you. So, I spoke to the owner of The Sun.

Ted: You spoke to God?

Rebecca: No, the newspaper.

Rebecca: And he has agreed to not run the photo of you and Keeley.

Ted: Sorry. Yeah, no. You were saying. Go ahead.

Rebecca: In exchange, I've agreed for his more reputable newspaper, The Independent, to do a profile on you. "One-on-One with Coach Lasso."

Rebecca: The writer will be Trent Crimm. And he's very good, and the supporters really listen to him.

Ted: Yeah, but that's okay. You know what you do with tough cookies, don't ya?

Ted: Dip them in milk.

Ted: All right, let's run that new one. Hey, there he is.

Ted: Hello, Trent Crimm from The Independent. Hey, excited to spend the day with ya. It is going to be fun. And please, call me Ted. All right, let's go!

Ted: Wide open. Yeah! Snuck it by him. Thataway, Sammy. How'd that feel?

Sam: Oh, wonderful, Coach. I felt that one in my penis.

Ted: Make it a performance. I want you winning an Oscar at the ESPYs next year.

Jamie: You want me to run decoy?

Jamie: It's a joke. Unfortunately for you, though, no one thinks it's funny.

Ted: Is that true?

Roy: Agree to disagree. I find it hilarious.

Trent: Interesting play, Ted. Did you come up with this?

Ted: Oh, no, no, no. This is all cooked up by our very own Nate the Great.

Trent: Who's "Nate the Great"?

Nate: Someone's been walking their dog here. Found another poo.

Trent: What exactly does "Nate the Great" do?

Ted: I'm not exactly sure what his title is. Hey, Coach. What is Nate's job around here?

Ted: There you go. Kit man.

Trent: Do you mean to tell me you're entrusting a Premier League team's attack to the kit man?

Ted: That young fellow's forgotten more about this sport than I'll ever know. Heck, might be a genius. Anything to add, Coach?

Ted: Boy, oh boy. If you knew Coach Beard, you'd know what a big deal that was. You mean that, don't you? 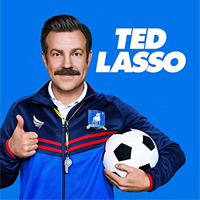