Dogs have a famously great sense of smell, and this is what makes their noses so powerful.


To us, this is just a field. But to this dog, it’s a portal through time. She can peer into the past, what happened an hour, even a week ago. Thanks to this exquisite olfactory device.

Zinka is a search and rescue dog - a champion sniffer. Today, she’s working with researchers from University of California, Berkeley. Yes she is.

She’s wearing a GPS device and other sensors, so they can figure out how she tracks smells so well -- like from this hiker.

Because tracking scent isn’t like following a dotted line on a map. Odors don’t spread out evenly. They’re all swirly and twisted around by air currents.

But Zinka’s nose can make sense of that. It’s a precision instrument. Like Us, dogs can tell if smells are coming from the left or right, because their nasal passages are completely divided.

But here’s how Zinka totally outdoes us. When she sniffs in, most of the air goes into her lungs. But some of it splits off into a separate stream that goes back into a special chamber -- called an olfactory recess. Inside there’s an intricate maze of little passages.

Here’s a researcher’s scan of what it looks like in cross-section. All those twists and turns create a huge surface area, which hold more than half a billion sensory cells that feed information to the brain. That’s 15 times more than we have.

All of our sensory cells are in this little patch. And we don’t have a special chamber for smelling.

And when Zinka exhales, the air is blasted out the sides through those slits, so she can take in a fresh sample each time.

First, she gets a sample, something the hiker has worn. Then, she hits the trail, sniffing about 5 times per second. Zinka can pick up the tiny amounts of scent, down to the molecules the hiker left behind, that we would never notice. She can easily tell her apart from other humans, as she finds her way through the maze of trails. Which leads her right to the hiker.

Hey there Deep Peeps! We love making stories about the beauty of nature - up close. And if you'd like to see what's going on in our world, come join us over on Patreon. You can meet the Deep Look Team, see what we're working on right now and maybe even pick up a few filming secrets.

And just for fun, here's a playlist of our favorite YouTube channels. Enjoy! English 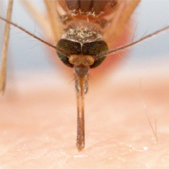